Aviation is a vital part of island life and for nearly 45 years Skybus has been operating a scheduled air service to the Isles of Scilly. However it was 40 years before this in 1935 when landing rights were secured between Penzance and St Mary’s by Cobham Air Services. Preparations started at a field in Kelynack, Land’s End with a 2,100 ft. runway, 4,080-sf ft. hangar, booking office, fuel store and basic servicing facilities. The site quickly became known as Land’s End Airport and on the 15th September 1937 the first schedules flight took place in a DH84 Dragon GADCR with just four passengers. The benefit of air travel was evident one of the passengers was the islands oldest resident – John Mumford who as a boy, it had sometimes taken him as long as fifteen hours by sea to make the crossing, the journey time was now just fifteen minutes!

15th September – The first scheduled commercial flight by Channel Air Ferries was made by a Havilland Dragon aircraft, carrying 4 passengers and the pilot (Capt. Dustin). It took off at 09:00 and landed at St Mary’s at 09:20. Initially there was just the one flight a day in each direction and fares cost £1.00s single and £1.15s return.

In March a second Dragon GACPY was used on the route and a DH83 Fox Moth GACFF was made available for pleasure flights. By April the service was increased to thrice daily with a Sunday service available on request.

Channel Air Ferries merged and became known as, Great Western and Southern Air Lines (GWSAL). During the summer there were up to eight return trips a day and by the end of September the Land’s End – St Mary’s route had carried 10,000 passengers, 18,000 lbs of freight and 5,000 lbs of newspapers since its inception in Sept 1937. 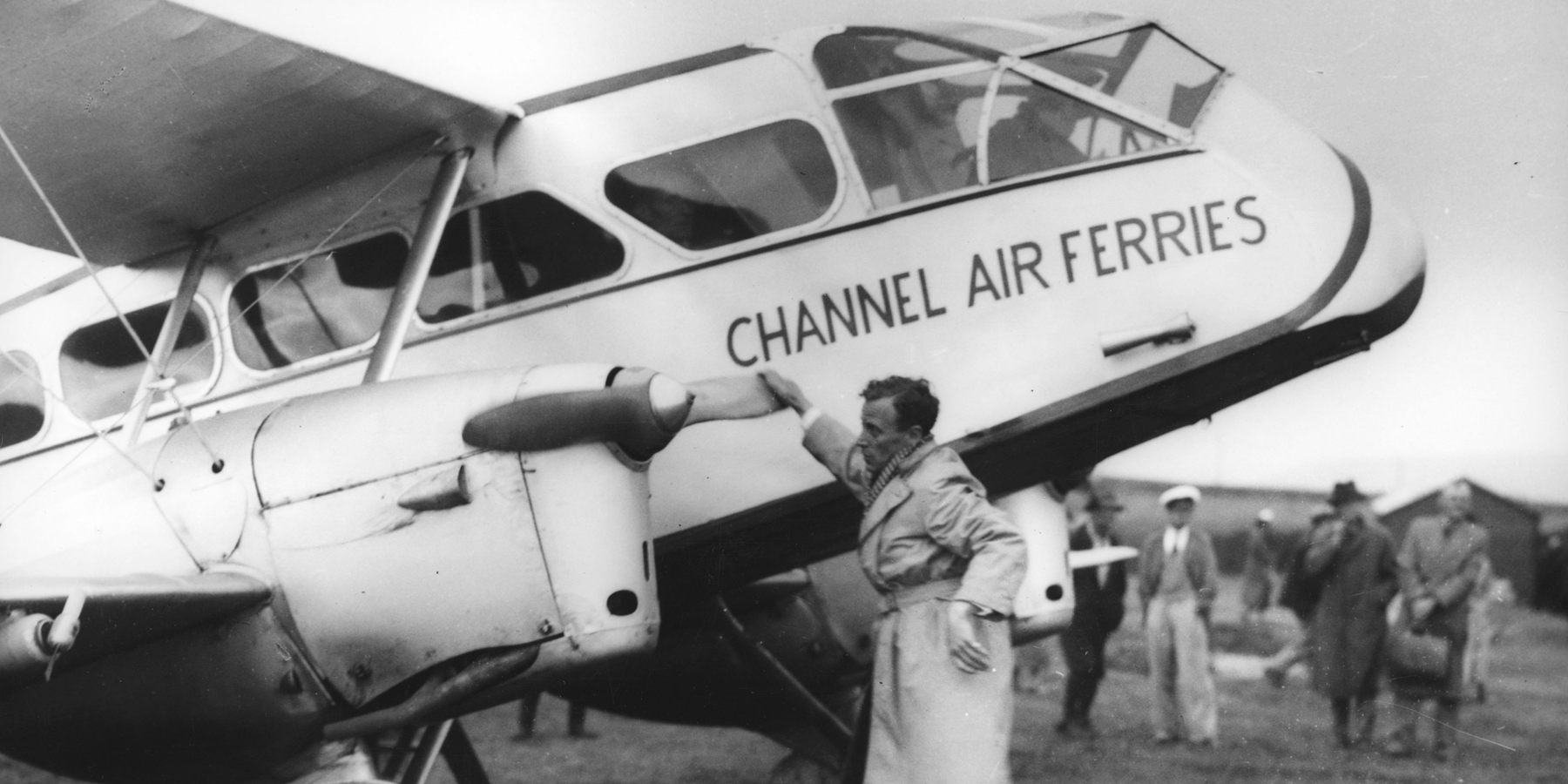 During the Second World War, flights reduced to three per day. The scheduled service resumed in June 1945 after the German surrender. The Land’s End to St Mary’s route was the only UK air service to be flown almost continuously throughout the war years.

1st February – GWSAL were taken over by British European Airways (BEA) and took over the air service to Scilly.

BEA’s service was proving very popular and was now well established. Passenger numbers hit a new record high with 36,000 making the journey between Land’s End and St Mary’ and over 50 tons of freight and 12 tons of mail were also being carried.

The Land’s End – St Mary’s route was said to be BEA’s busiest internal flight making up to 20 round trips a day and it was also the last BEA service to operate Rapides. Ticket prices to Scilly were now £1.10s single and £2.10s return. 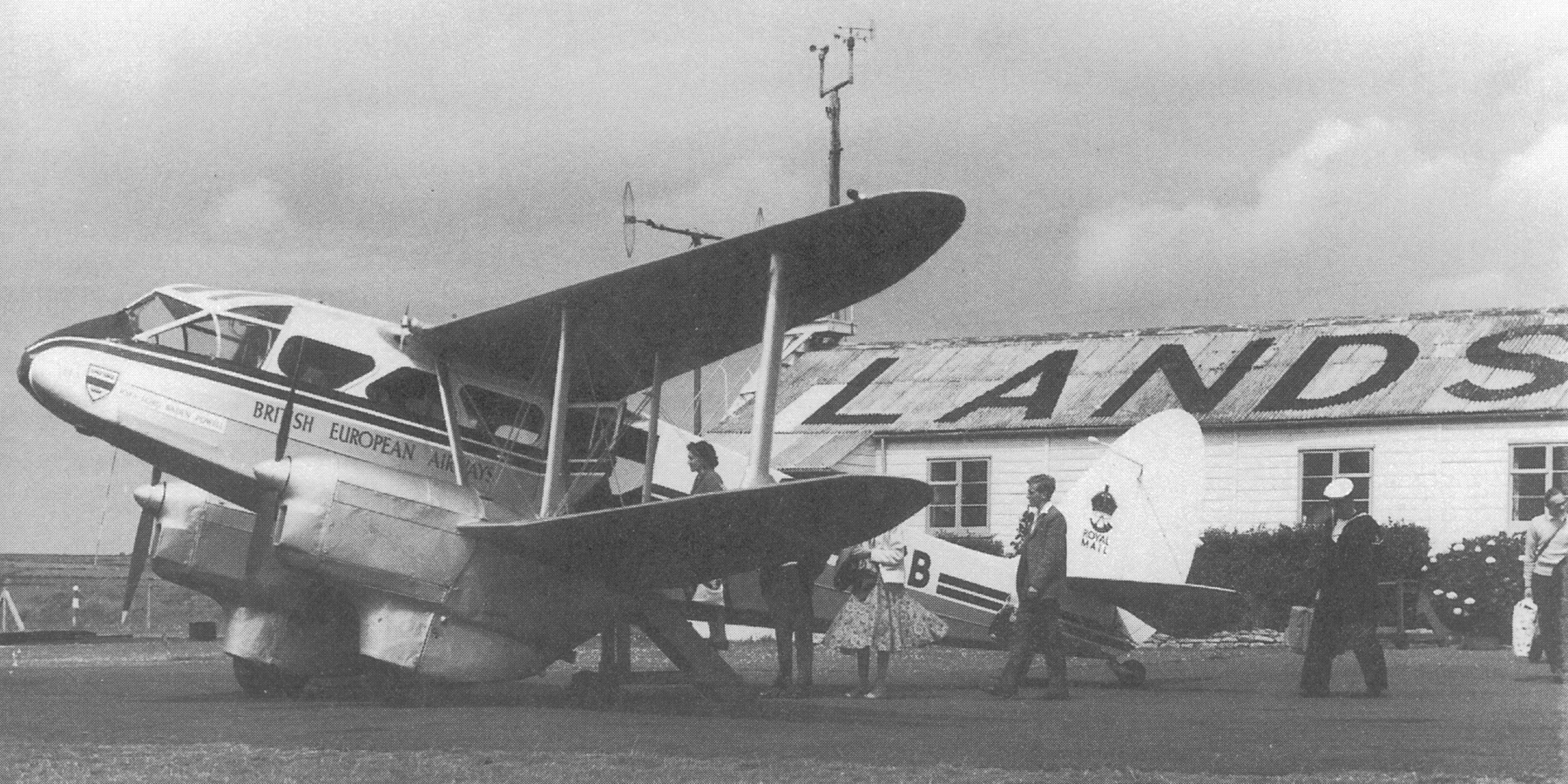 In the early sixties there was a strike at the dock in Penzance which meant Scillonian couldn’t sail. Extra flights were put on from Land’s End to St Mary’s, on one day alone two tonnes of milk, bread, sugar, flour and meat were transported to the islands.

By the end of 1962, the Rapide aircraft used to service the route had carried more than 337,500 passengers to and from the Isles of Scilly.

A new airline, Scillonia Airways, was formed by Capt. Neely and based at Land’s End. The company acquired Rapides GALGC ‘Bishop’, GAHAG ‘Bryher’, GAHGC ‘Tresco’, GAJCL ‘Samson’ and GAHKU a second ‘Bishop’. The airline was the last commercial operator of De Havilland Rapides in Europe. 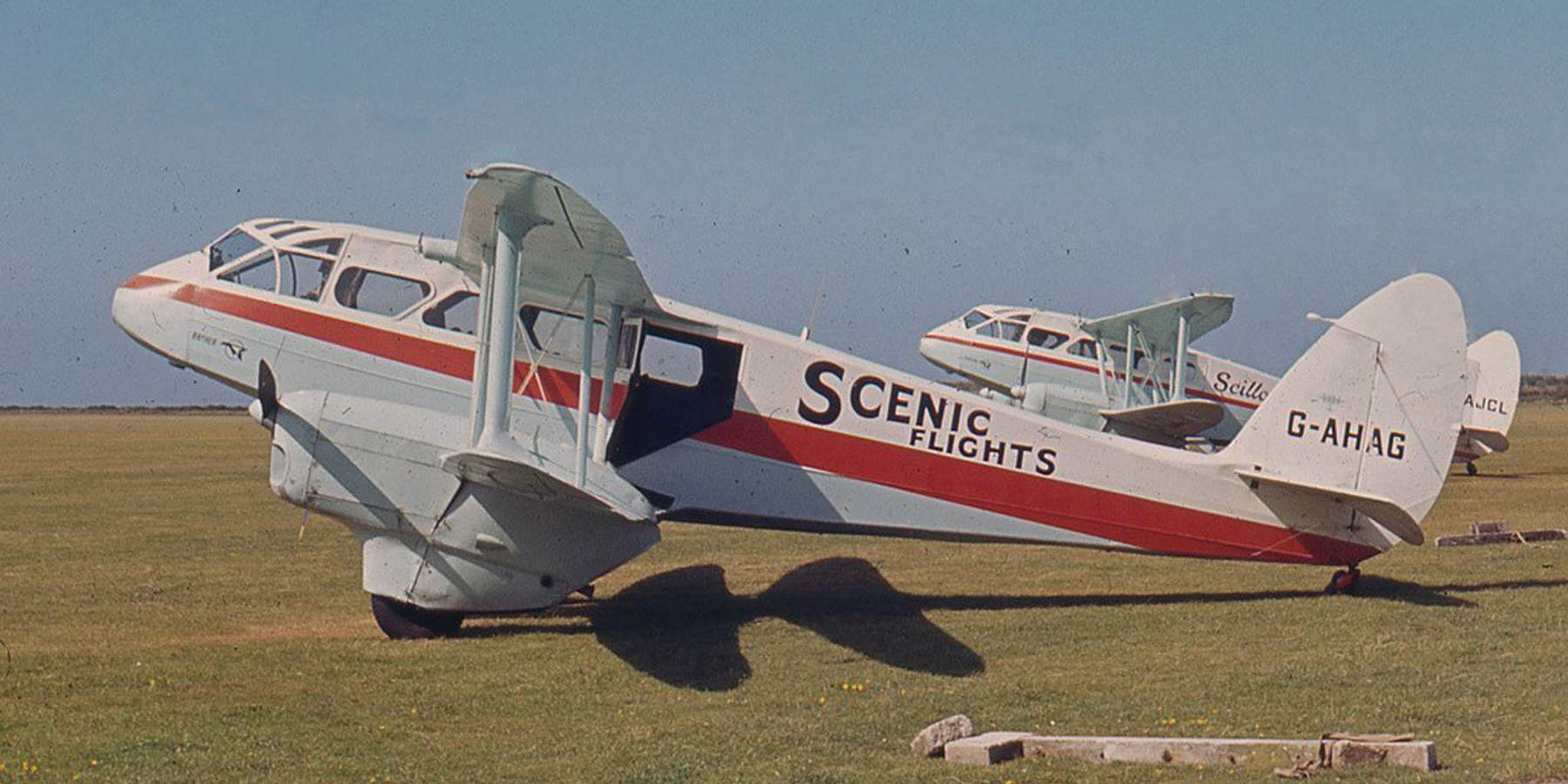 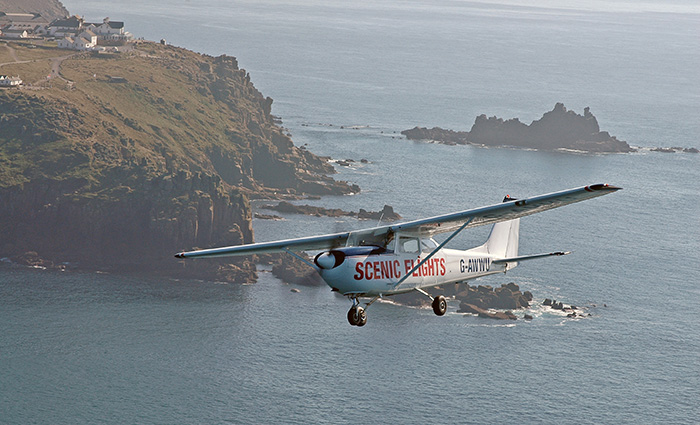 Westward Airways launched, formed by the famous aviator Viv Bellamy. BEA objected to a new scheduled service to the islands, so instead he created an engineering and restoration facility along with pleasure flying and launching a flying club. The school trained more than 100 pilots over the years including Skybus’ Chief Pilot, Richard Ashby. 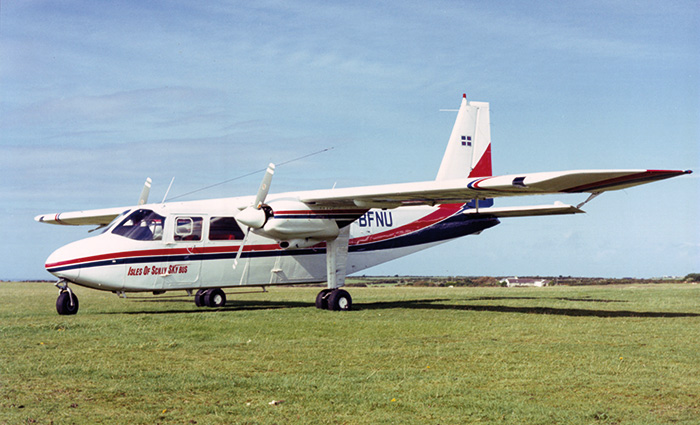 Isles of Scilly Steamship Company (ISSC) applied to operate a scheduled daily passenger and freight aircraft service, but the proposed airline, Skybus, had its application rejected in July. ISSC still purchased an Islander, GBNFU and offered a freight and chartered passenger service. The aircraft made its first trip from Land’s End to St Mary’s on the 9th August. 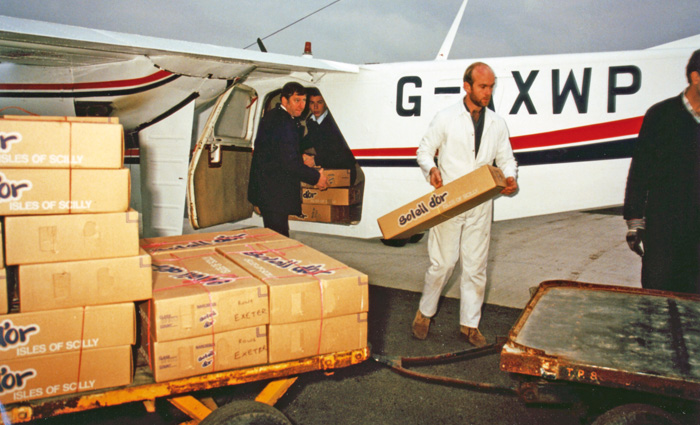 During 1985 35,000 boxes of flowers were flown to the mainland using the Skybus Islander and in the December Skybus added another Islander, GSBUS to its fleet. Also a television documentary called ‘The Perfect Lady’ began filming at the airfield. 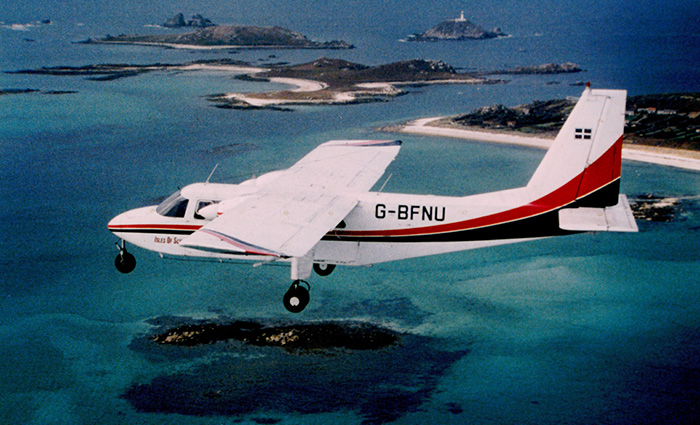 By March a restricted passenger licence was finally granted to Skybus to operate a scheduled service between Land’s End and St Mary’s (these restrictions were eased later that year). On 1st April the first scheduled Skybus service was introduced and went on to carry 15,700 passengers during its first year. 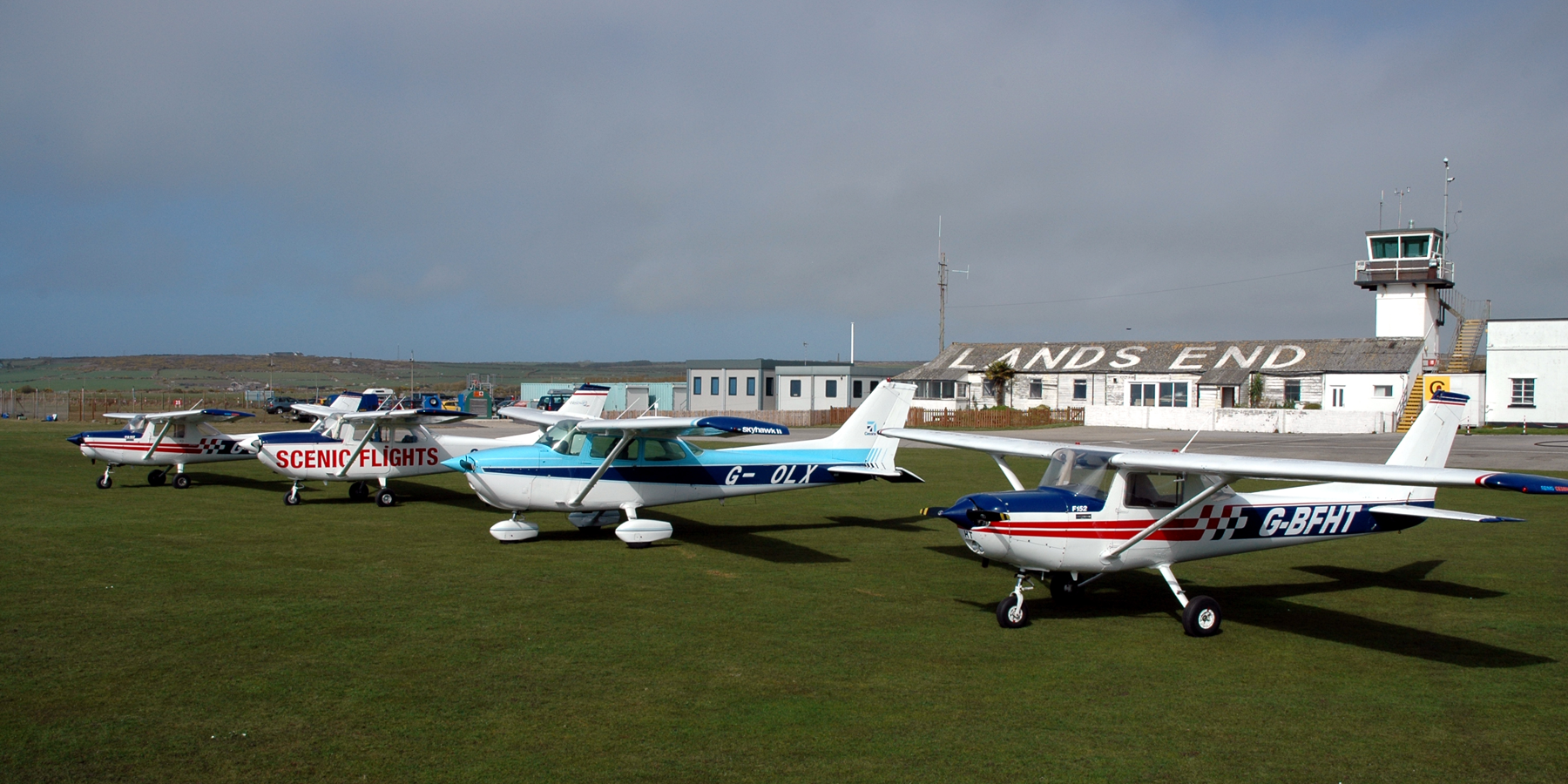 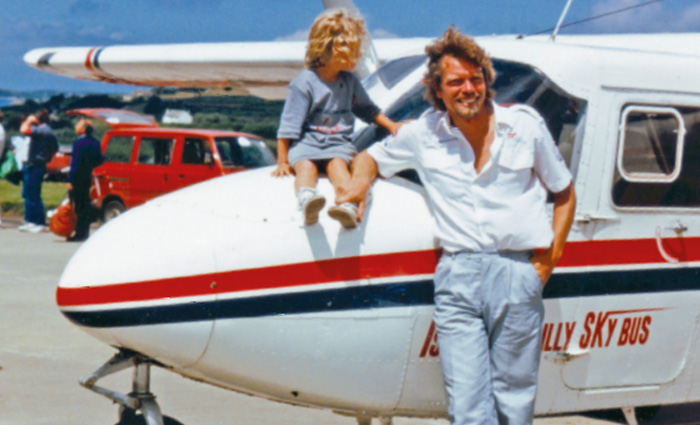 An air day was held on the 25th August. Visitors included Harry Seacombe and Richard Branson.

During this year a new hangar space was built (nowadays it houses the engineering hangar for Skybus) and the air traffic control tower was refurbished. By the end of 1989 Skybus passenger numbers had grown to 24,000 and they were transporting 600 tonnes of freight.

Trinity House operations moved to Land’s End Airport as their base for operations after helipads were installed to take keepers on and off lighthouses.

In May the council Joint Committee who own the aerodrome decide to sell the freehold in a closed bid auction. A property company in London, Ambercroft Properties Ltd, submits the highest bid and buys Land’s End Airport for £376,000 and ISSC continue as the aerodrome’s tenants. 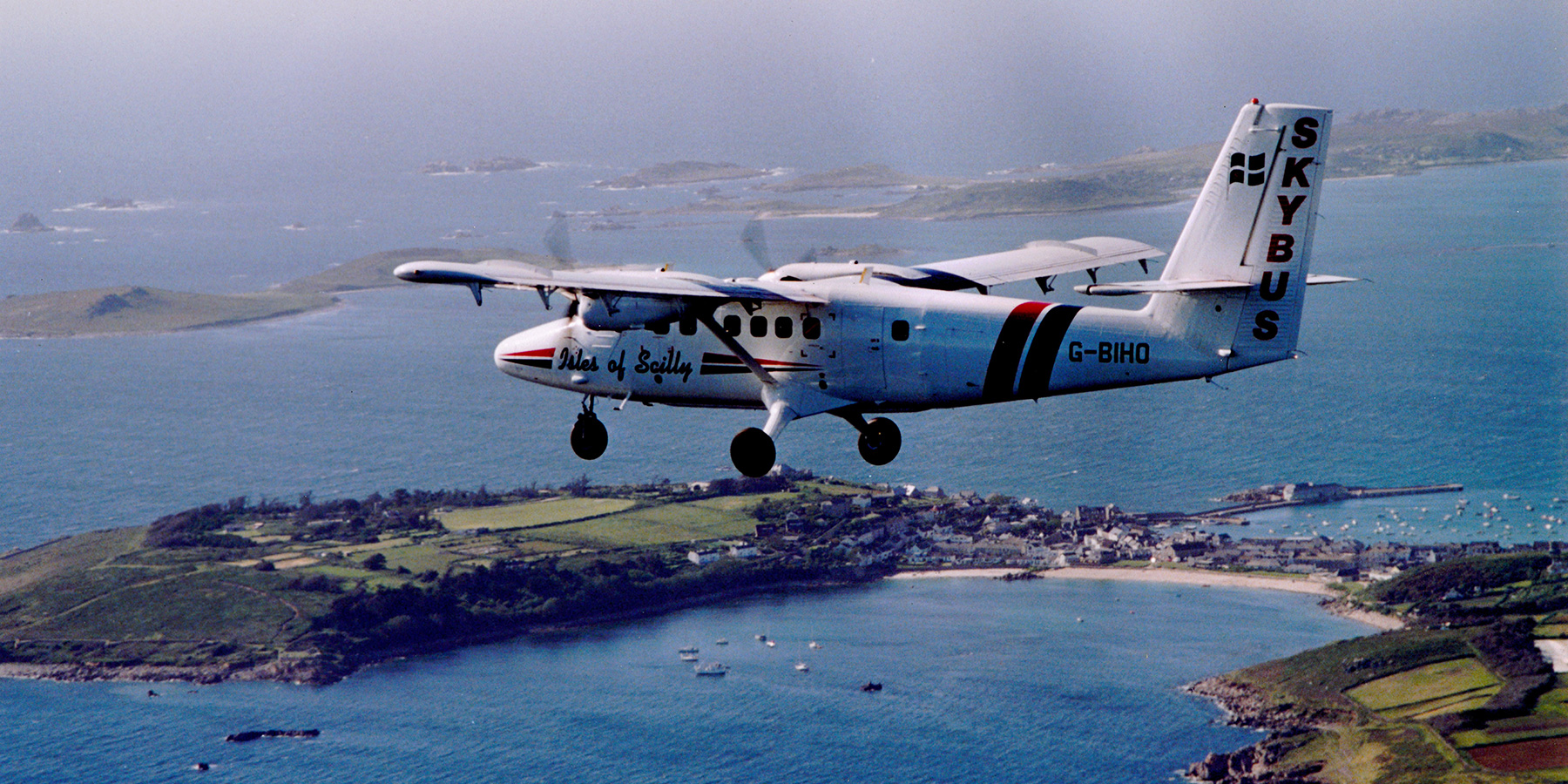 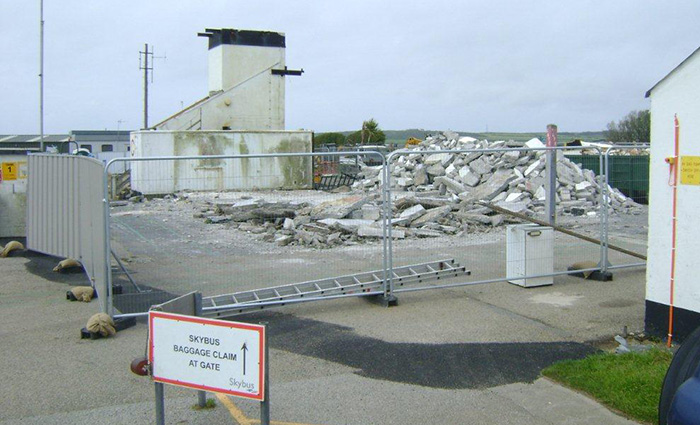 The airport freehold is purchased by ISSC from Ambercroft Properties Ltd in January and they start work in June to construction of a new Passenger Terminal and Air Traffic Control Tower. 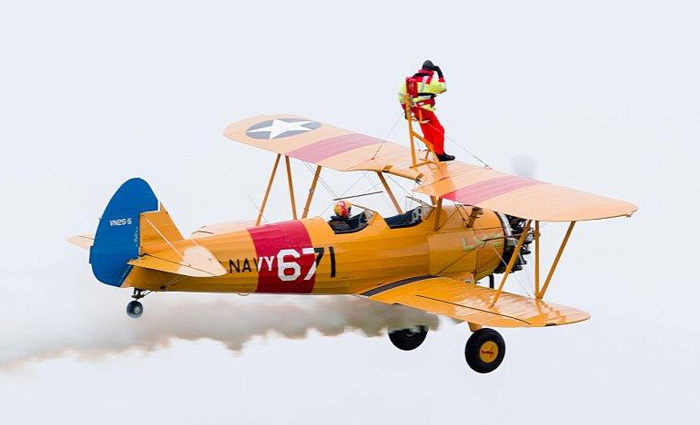 22nd May – Grandfather Tom Lackey made history when he became the first person to wing walk from Land’s End Airport to the Isles of Scilly – on his 94th birthday. In June the £2.6 million project to surface and harden the two grass runways at Land’s End Airport gets the go ahead and is successfully completed by the end of July. 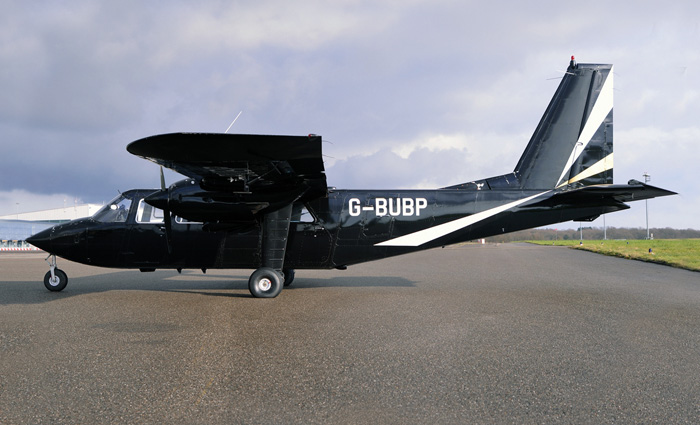 Skybus take delivery of another BN2 Islander at Land’s End Airport in time for the busy summer holidays, but earlier that year the aircraft had a rather different guise – in the new James Bond movie blockbuster, Spectre. 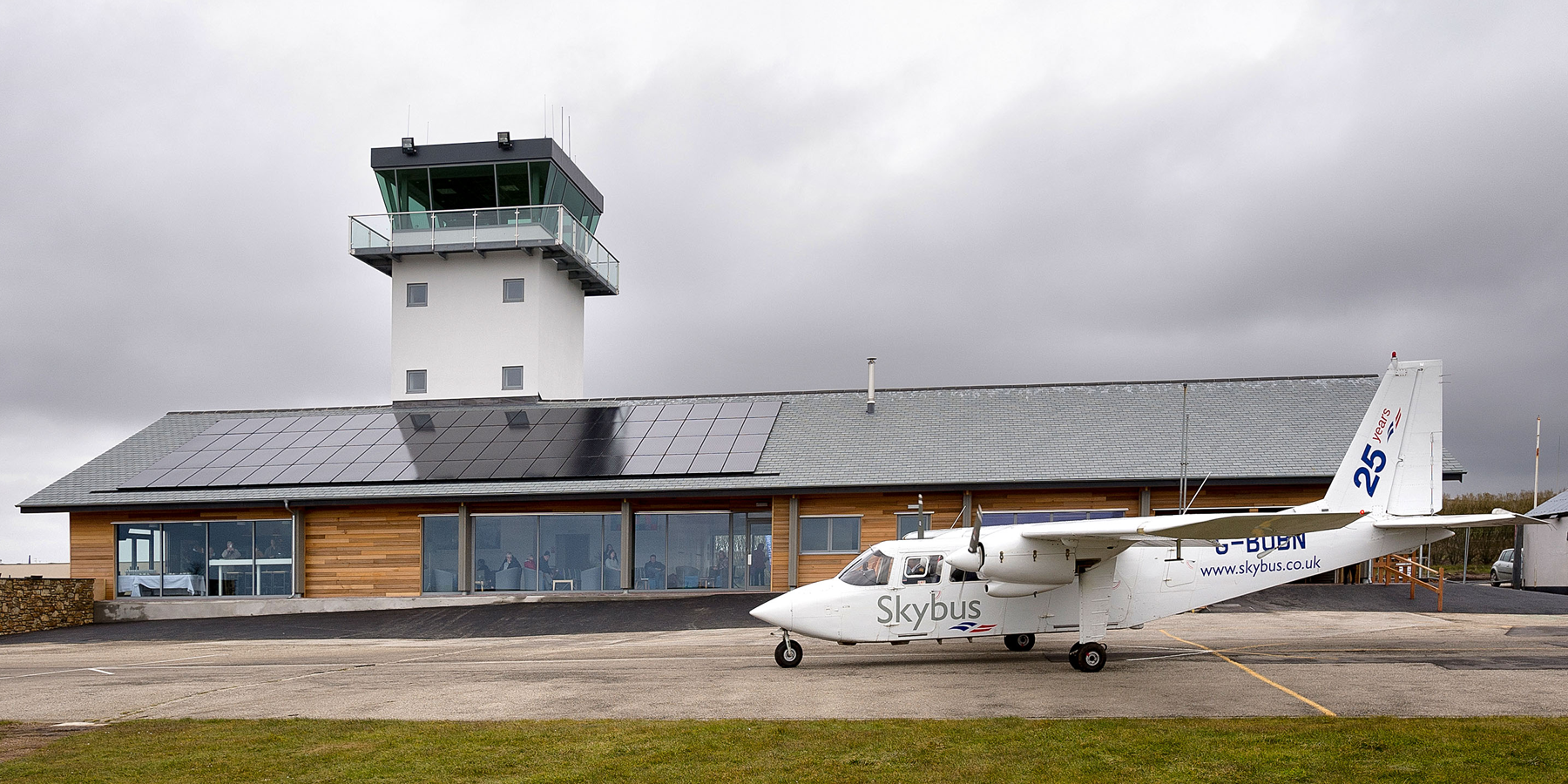 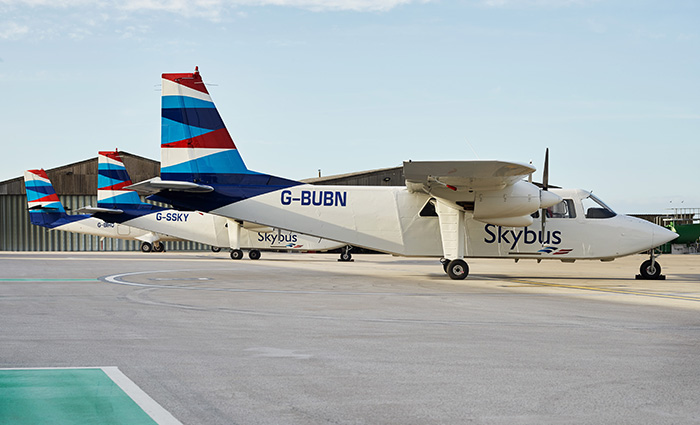 Land’s End Airport took delivery of a state-of-the-art fire appliance, following an investment of almost £200,000 by ISSC. The appliance is the first of its kind in the. A further £530,000 investment was made to the Skybus fleet of aircraft to include new interiors, enhanced navigation systems and an eye-catching new livery’s. 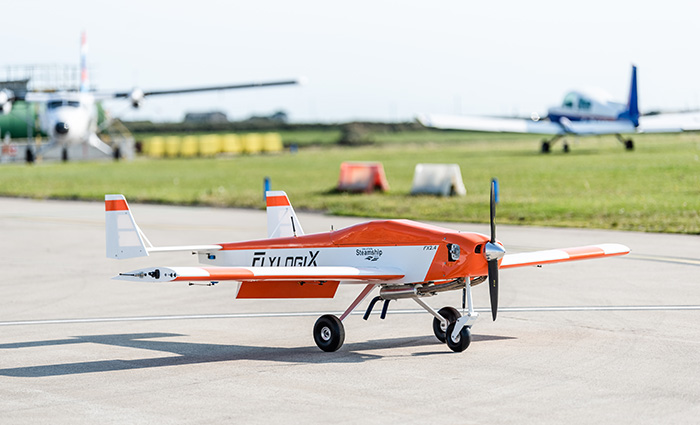 COVID restrictions are enforced in March and the airport and Skybus receive central Government funding for the Lifeline Service to continue. In September ISSC partner with Flylogix to trial UAV (drone) freight delivery service for Isles of Scilly community. A trial flight was successfully completed in December. 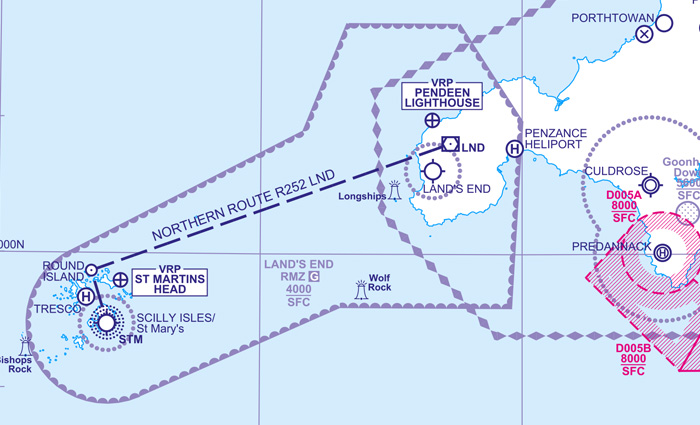 The Radio Mandatory Zone (RMZ) between Land’s End and St Mary’s airports was approved by the Civil Aviation Authority (CAA) in November to improve the current unknown traffic environment between the two airports. Any aircraft now entering this airspace must contact Air Traffic Control by radio. Also July saw Land’s End Airport record its busiest July ever, with more than 8,500 passengers passing through the airport. 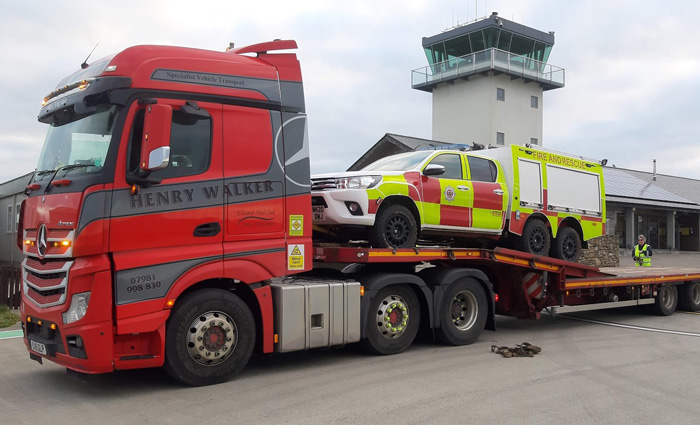 All COVID restrictions are removed and in January the airport took delivery of a new state of the art fire appliance to help maintain the resilience of the airport’s fire service. 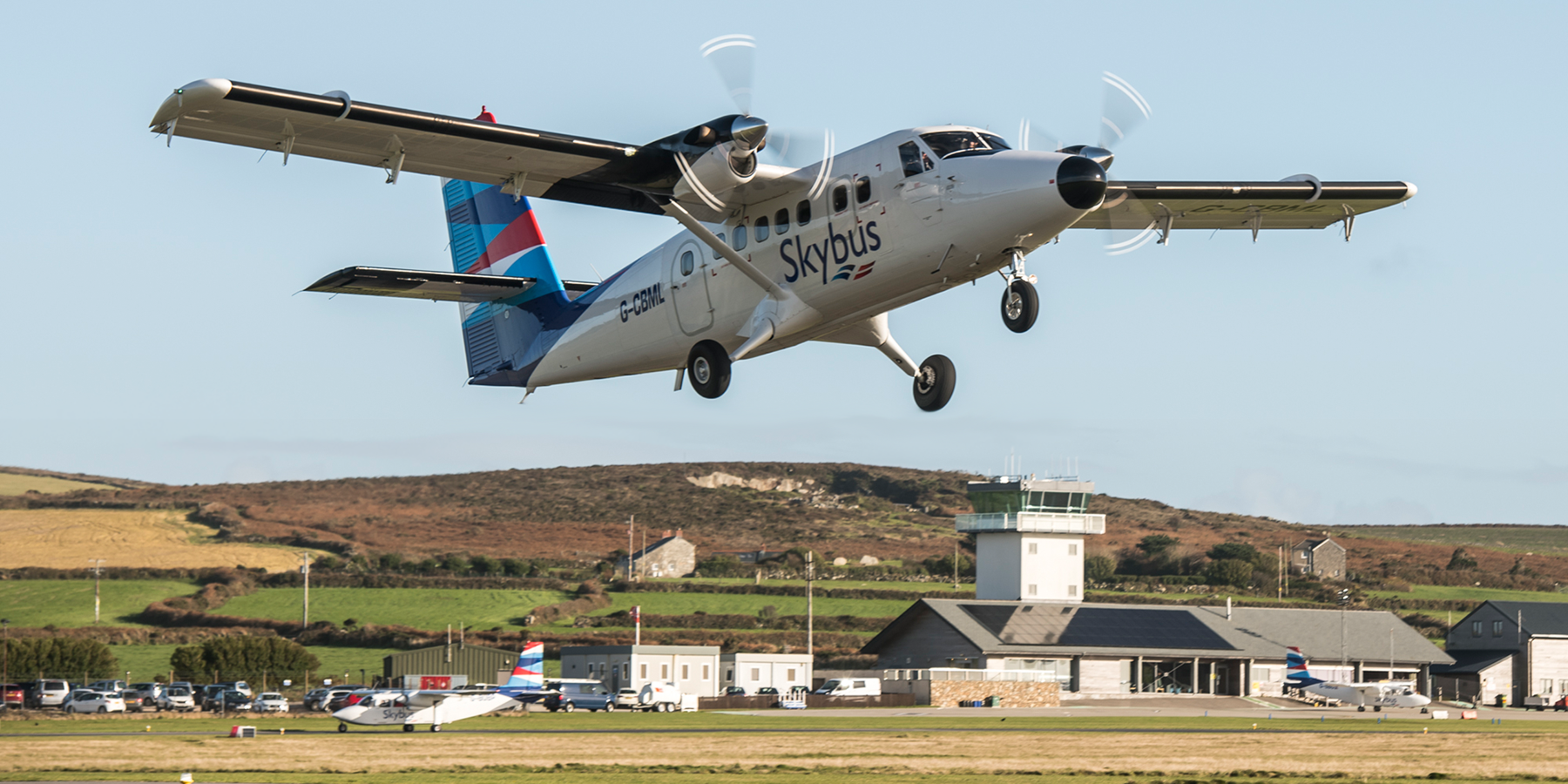